The Prophets of Profit: One-on-one Meetings vs “The Triad” with Mark Taylor 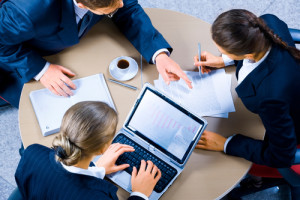 We had an insightful conversation with keynote speaker, leadership trainer, and organizational consultant, Mark Taylor. With a 35-year history of being an accomplished CEO and corporate executive, Mark runs five think tanks in Manhattan for Vistage International and delivers training and retreats for organizations that want to change their culture to create a high performance organization. He’s the author of The Leadership Field Manual: Exercises & Tools for Executing Culture Change. He is a member of the National Speakers Association (NSA), holds a BS and MBA, is a fellow at the Fair Institute of Performance Virtuosity, and is a certified organizational coach.

Click here to listen to our entire conversation with Mark Taylor.

Vistage is the world’s largest CEO membership organization. People join Vistage to become better leaders and to learn how to make better decisions in business. It’s comprised of a selective group of top experts in their respective fields. AcceleratingCFO’s very own Scott Margolin met Mark through Vistage and is a member of Vistage NYC’s Trusted Advisors Group.

The Power and Stability of Triads

During Mark’s early research, he discovered a thought-provoking statistic. A study of 24,000 people over 12 years found that 76% of the sample’s working relationships were ineffective. However, within this group of 24,000, there was a small number of people who had three to five times more success than the others. The difference was the way they interacted with people.

While most leaders in Corporate America conduct meetings one-on-one, this small group of successful people were meeting in groups of three. Mark looked deeper into this and saw that successful companies like Zappos, Apple, and Google were all meeting in threes as well. At Vistage, Mark went to his members and told them about the study and pitched the idea of meeting in groups of three — in triads. The hope would be that this new dynamic will move them to the next stage in their business — whereby stress would decrease, and profitability and fun would increase. Half of the group declined right off the bat. The other half was willing to try.

Six months later, the original decliners were ready to try after hearing all of the success stories. Today, most of Vistage’s members meet in triads.

The third person in a meeting becomes a potential ally to the other two. In groups of three, people find themselves more willing to speak their mind. People are also more receptive to criticism voiced by two colleagues over just one.

Mark uses engineering principles to further illustrate the benefits of triads. You need three points in any structure for stability. Look at a stool. The third person in a meeting stabilizes the relationships. In that meeting, there are three people, each of them committed to managing the relationship between the other two people. The third person acts as an observer and is able to look at the issue within the context instead of looking at just the content.

There was a question from a listener who is the owner of a marketing and business growth consulting firm: How important to your growing business is the team you build?

Mark explained that it depends on where your business is now. Mark learned a fascinating fact from Mastering the Rockefeller Habits: What You Must Do to Increase the Value of Your Growing Firm. Out of the 28 million businesses in the United States, 96% of them are small businesses with less than $1 million in revenue and 10 employees or less. 4% of the businesses have $10 million revenue. Just half of 1 percent have $50 million or more in revenue. Each level of business has its own set of roadblocks to overcome. In Mark’s experience, at the $10 million level, the biggest obstacle he sees CEOs encounter is the failure of hiring a solid executive team.

With smaller businesses, the CEO is stuck in the business doing everything. You cannot scale until you learn to let go. Mark cited that the moment his second business became a success was when he hired a team comprised of smarter and more talented people in sales, engineering, and finance. As soon as he did that, the company grew and became the 58th fastest growing company in the state.

There was another question from a leadership and communication skills coach who helps technical individuals manage without authority: How do you teach a group of people with no formal management training or experience to become better leaders and managers?

Mark starts off by pointing out that to do anything, you need to fully commit yourself, practice regularly, and seek guidance from mentors. Vistage provides this with regular member meetings with leadership experts as guest speakers. Members also have the opportunity to bring forth their challenges and issues for feedback from the experts and their peers.

Mark also explained that one of the critical things you need to do when nurturing your managers is to let them work it out on their own—and fail if necessary. It’s difficult to go on sales calls and watch your sales person lose a sale that you could have saved, but it’s important to let them so you can coach and mentor them afterward.

You also must keep in mind the significant differences between a leader and a manager. A manager gets things done. A leader is the strategist. A leader paves the road and points to the goal; the manager puts the vehicles in place and ensures they get to the goal.

According to Mark, the characteristics he sees in successful leaders are:

Do you have what it takes to be a successful leader?

Click here to listen to our entire conversation with Mark Taylor.

To learn more about Vistage:

Got to Vistage’s main site at Vistage.com

The Key to Self-Employed Success

The Prophets of Profit: Becoming a Social Media Master With Stephen Monaco

CFOs Should Be Smart, Good Leaders… and Psychic?

Cloud-based Platforms for the Digital World: What Systems You Need to Know